Usually, the common man believes in the importance of extraordinary power to succeed. This week, we are happy to have a chat with Maxton Scotland, who outlines the importance of hard work over supernatural powers.

I am From London, England. I was privy to a cosmopolitan West Indian and British upbringing. This exposed me to different cultures and commonalities among all people. The thing I enjoy the most is seeing the success of young people, especially from a disadvantaged background. This reinforces the notion that, it is the individual and not their background that determines their success. People like Nelson Mandela, Che Guevara and Desmond Tutu always inspire me as they stood up for ordinary people.

I spent my formative years on the island of St. Vincent and the Grenadines. There, I grew up in a tiny Village on the Windward side of the island, called Victoria Village. The village was made up of what many would refer to as an eclectic group of people. The village was responsible for raising every child, but the onus was on the child to either become successful or not. I chose to become successful, but it was only through hard work and realizing what I need to do, the sacrifices that I needed to make, that propelled me to where I am today. The education system on the island is a direct replica of the British, with corporal punishment still being part of the disciplinary structure.

Many others like myself, would always compliment the use of corporal punishment and the love of the teachers as the driving force behind our success. At the age of 14, I was in a precarious position where through circumstances, I was faced with the most important and life changing decision ever. I had to choose whether to become a statistic or forge my own success story. (In those days, male marginalization was real and affected many intelligent young men. Society was not too forgiving towards ambitious men). I became creative, start using my garden, grew and sold vegetables throughout my village and surrounding villages, in order to fund my schooling.

I also became the youngest Tour Guide on the Island.

My teachers always recognized my potential and constantly pushed me to perform above and beyond my potential. I could’ve chosen to be another young guy on the block and be a victim of circumstances, or define my own destiny. I chose the latter and above all, look back at my upbringing with pride. Pride of where I came from and, even more, proud of how I overcame all the hurdles.

Your Failures and Setbacks 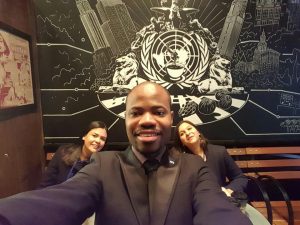 When I finished college, I wanted to go to university to continue my education in the field of politics and international relations. I had completed 4 A’ Levels (English, English Law, Spanish, and Psychology) with one textbook and this championed my desire to go further. The government had a program for students from disadvantaged backgrounds – where they were able to apply for student loans, to attend university. I applied back then but unfortunately, wasn’t successful.

This was the turning point in my life and I felt as though the gods were conspiring against me.

That moment, all my achievements to date seemed useless. However, I didn’t sulk for long as I realized that it wasn’t doing me any justice. I got into teaching and along with inspiring students, I inspired myself and completed my studies via distance learning.

Now, I am a proud Ph.D. candidate.

It reinforced my belief that it is not the situation that makes a person, but it is a persons’ desire to overcome, that shapes them and their destiny. 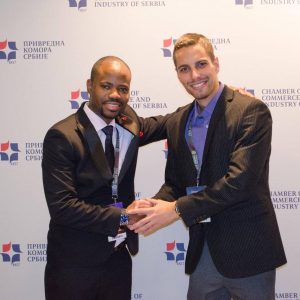 I talked earlier about my background and my will power to press on no matter what. What I had not mentioned before, was the strong religious background from which I came. My family was very religious and this was the cornerstone of everything we did. I always had an idea of what I wanted and to remain focus on that goal, until it is accomplished. After leaving college, and giving a few jobs a-go, I remained actively involved with youth development and volunteered for an adult literacy program. One cannot underestimate the depth of knowledge one can gather from our older generation. Their experience can and will always help us, especially with decision making.

After teaching for some time, it felt as though something was missing. So I enlisted in the UK Armed Forces. This opened many more doors of progression for me. It was not easy at all. Perseverance, discipline, an attitude of gratitude, strong will and a willingness to adapt to any environment, propelled me to where I am today. I had a unique opportunity to become a Military Linguist, through the completion of Long Language Training at the Defense School of Languages in the UK. When I left the Military, after 5.5 years, I volunteered for an Ex-Military Charity. I wanted to learn from other veterans like myself, how they were approaching their transition back to civilian life. This not only assisted my transition but ensured that I didn’t make some of the mistakes others had made. 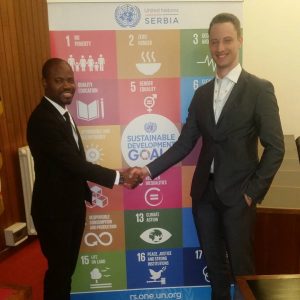 Now I work in corporate communications, volunteer at the Rotaract Global Model UN and Rotaract Global MUN international youth decision-making body. I am the Executive Chairman of the committee and also the representative for the African Continent. I have since been involved with and is extremely passionate about the United Nations Sustainable Development Goals (SDG) in Serbia, at the UNESCO SDG forum. I have also been involved with the World Summit of Nobel Peace Laureates and have attended the most recent summit in Barcelona, 2015.

My passion now lies in the field of international diplomacy and it is important to note that, I didn’t find it overnight. I had to make a few mistakes, gather experience in various fields before I realized what exactly my calling was.