“We move in a world which we do not control, but which controls us, which is not directed toward us and adapted to us, but toward which we must direct and adapt ourselves”.

Social Inclusion is the act of making all groups of people within a society feel valued and important. Every individual should feel their opinion is heard and recorded for the process of policy making. The history of the social inclusion dates back to 19th century where Weber initiated the concept “Social Cohesion” in 1970s. In 1980- 90s the same concept spread all over the Europe and UK in the name of “social inclusion”. Sri Lanka is a melting pot where multi-cultural, multi-lingual, multi-ethnic and multi religious groups live together in one country. Furthermore, they are intermixed. None of the religions, ethnicity, cultures or languages each belong to is their choices. Because it is predestined. Other than those material tags, you and I are human beings.

Mentioned in the 2017 budget speech in Sri Lanka, “Accelerating Growth with Social Inclusion forms the broader theme of the 2017 National Budget”. According to the World Bank Report of Sri Lanka in 2015 on ending poverty and promoting shared prosperity, there are four dimensions of inclusion. They are inclusion across

These dimensions are interconnected and interdependent.

30 years of conflict negatively affected the entire country. World Bank report confirms areas most affected by conflict have highest levels of poverty and weakest equality of opportunity. Predominantly, the North and East. Furthermore, Kandy- Colombo- Galle multi-city agglomeration, followed by other single city agglomerations contain highest number of people living in poverty and who are vulnerable to poverty.

In Badulla and Nuwara Eliya large portion of the estates inhabit poor. Rather than urban and rural, estates are highly exclusive from the society by poverty, health and nutrition. In addition, poor outcomes in education impede the ability of the estate population to participate in the society. Even educated estate youth face difficulties in finding jobs.

Sri Lankan Tamils and Moors are the two largest ethnic minority groups and have higher levels of poverty. Compared to the Sinhalese, majority non-Sinhalaese opt for private sector jobs. One could conclude, since the country heralds as a Sinhala Buddhist nation, the majority ethnic community consider themselves as the chosen and privileged. Pride goes before a fall. As a result, the ethnic group egos fueled by politics was the root cause for the ethnic war of the country.

Winning hearts of all ethnic groups is the cornerstone for cohesion and social inclusion. The post war period has seen the return of over 700,000 IDPs in the North and East. Their access to basic human needs like shelter, food, infrastructure and development of their livelihoods are still in the ground level.

For married women and for those with children in most countries labor force participation is low. In addition, Tsumani and the conflicts made the female exclusion worse. Some of them are widows and are mostly vulnerable in society.

Gender based violence is a trending topic; females are the primary victims. The root cause for these is because society is not resilient to problems. Leadership oriented and decision making roles are fewer for females. Also, females are prone to choose public sector jobs over private sector. In addition, women and girls carry much of the burden of deficient sanitation and hygiene facilities. This affect not only their health and hygiene but also their safety, education, dignity, livelihoods and quality of life.

Another sector penalized in society is LGBTQ. People should have their freedom to live the way they want.

All the people in Sri Lanka lived peacefully until 1956 when the S. W. R. D. Bandaranaike regime implemented the Sinhala only bill. In 1987, 13th amendment to the Constitution recognized Sri Lanka as a Multi-cultural state. Due to lack of resources and will, Legislation to use both Sinhala and Tamil in the administration of the country is not implemented. In addition, the Ministry of National Languages and integration requires more improvements. Language is a powerful instrument in promoting peace and social inclusion. As a wise man said, when you tell a person something in English, he will keep that in his mind. If you tell the same thing in his native language, he will bear it in his heart. 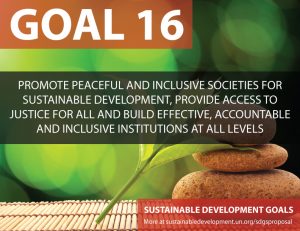 Society, economy and polity are crucial for sustaining peace and security. Sri Lanka is less plural and more diverse at present. When all processes underpinned by the tenants of a rights-based approach to development it’s totally a sustainable development. These include sustainability, empowerment, inclusion, equity and dignity. Each and every SDG prioritizes inclusion. Especially goal 16 (Peace, Justice and Strong Institutions) is dedicated for that. Inclusion is part and parcel of the agenda. SDGs gave the priority for inclusiveness by seeing the huge gap widening between the have and have-nots. In addition, once UN Women Head Phumzile Mlambo Ngcuka said, “If you don’t know where to start with the SDGs, start with women and girls. Everything will fall into place”.

Durkheim believed that society exerts a powerful force on individuals. According to Durkheim, people’s norms, beliefs, and values make up a collective consciousness, or a shared way of understanding and behaving in the world. Simpler societies are based on mechanical solidarity. In them self-sufficient people are interconnected by close personal ties and traditions. Modern societies are based on organic solidarity. In them people are connected by their interdependence in the division of labor. Social integration restores the mainstream society ones who are excluded and marginalized.

Respecting political, socio-economic and cultural identity of each other is especially relevant. There should be proper interventions and actions to provide for equal opportunity of participation for all segments in society, the economy and politics. Confidence building and acceptance is a must for that. The police, judiciary and state administration should respect the individual rights of all, irrespective of their religion, ethnicity, wealth and political party affiliation. There is a need for respect and voicing all forms of identity. Ethics education is popular in the world which can promote social inclusion in a proper way. Equal access to resources, a life of dignity, and full participation in the life of the community is all about social inclusion.

Finally, it starts from just five letters which are “RESPECT”. As a result, diverse communities are healthier, fit and sustainable.