MEDIA! An umbrella of 3 shades covering the fundamental means of mass communication – publishing, broadcast and internet. Media has the power to establish or destroy governments. A profession not for the faint-hearted but for those with guts to hoist the flag of TRUTH.

Media! You either love it or hate it, but cannot ignore it for too long as it’ll be right in your face. In the form of paper with a rustic smell used to wrap your lunch pack or your expensive crockery. The radio in the bus or the radio at the lottery ticket booth. That WhatsApp message, that Facebook news feed, that trending video on YouTube. That controversial pic on Instragram. Wherever you may go, it shall follow you.

The silver lining between the mainstream media and online media war is that people are updated and informed today. They know what happened, what’s happening and what’ll happen. With the evolution of technology Media has become independent in the ways and means it can utilize to publish news.

Liberty comes at the price of Responsibility. Freedom one receives should not be abused. Fake News or HOAX has become the talk of the town since the US elections 2017. The tycoons of the tech world are working to mitigate the spreading of fake news online. “First news is the big news!” “Bad news sells more!” The media institution that is competent to put the sensational piece out first takes the cake. As human beings, we crave for juicy gossips, we loathe in depression and discontent. Therefore we warmly welcome any bad news that adds to our miseries. Modern day marketing and business strategies cater to our negative psychology. Even if a piece of news is a fib but creates hype and entertains the audience, why not sell it? Profit maximization with the aid of misinformation.

In this era of misinformation, fake news, bad news, sorrow, hatred and violence reported by the Media, is there any place for hope, justice and peace?

The challenge that Media faces today is not getting the news published first or the angel of death lurking around them for reporting the truth. It is the ability to present the dark truth in a creative manner. It is not to glamorize the unfortunate situation but to be unbiased and critical of it. To be the voice of the voiceless. People admire the personalities of men and women who work in the armed forces. It is for the discipline and dignity they carry along with their personality. Similarly, today a journalist who is capable of reporting the truth, able to devise a solution to the problems through expert advice and research and inspire hope among the audience, is valued and admired.

The world has groped in dark for long, it is time that it is shown rays of hope which could alleviate human lives. It’s not fictional or false promises. Bringing forth justice to the oppressed. Peace to the war torn. Grabbing those pushed to the corners, harassed only because they look different. 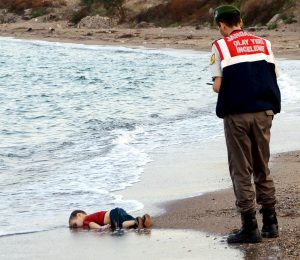 The issue of migrant refugees, war in Iraq, terrorism, potential threat from North Korea’s nuclear tests… All these are burning crisis’ of our times. We are still reporting these issues. As viewers or readers our blood boils at the injustice. But the flame ignited by the news douses as we switch off the TV. No permanent solutions or remedies are spoken of or initiated. While reporting these tragedies, Media has the responsibility of also initiating means to offer help for those who are suffering. The sympathetic hearts and hands that are willing to help those suffering from these crisis’ should be encouraged to come forward.

Media today should be a Participatory Media. Furthermore, their role does not end at the reporting stage. They should bear the piece of news they report till it is solved.

The only good that came from a fake news was the hoax of Alfred Nobel’s death. Ironically that hoax is promoting peace for almost a century.

The rewards of choosing a career in the Media is not monetary but much more valuable that no money in the world can buy the joy you receive from it. Telling stories, rewriting stories and beyond all the ability to write the happy ending of a story. This is the role of Media today!

We appreciate all media personnel who have contributed to society so much and continue to do so despite the attacks and challenges they face. We salute all journalists who have crossed boundaries to make the truth heard. 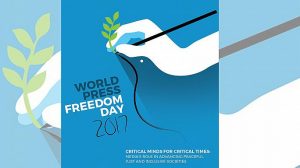 The world where the pen rules commemorates World Press Freedom Day (#WPFD2017) on May 03rd. The theme for 2017 is “Critical Minds for Critical Times: Media’s Role in Advancing Peaceful, Just and Inclusive Societies”. #WPFD2017 celebrates the fundamental principles of press freedom. It helps those involved in the media to unwind, rethink and evaluate the freedom of press across the globe. Identifying and defending the media from instances where the liberty of media is curbed, hindered or terrorized tops the agenda of #WPFD2017. The #WPFD2017 also honours the lives of journalists sacrificed in bringing the truth to daylight.

UNESCO in collaboration with the Indonesian government and the Press Council of Indonesia are organizing the #WPFD2017 event.