someone outside their country of origin for reasons of feared persecution, conflict, generalized violence, or other circumstances that have seriously disturbed public order and, as a result, require international protection.

On June 20th the world commemorates the strength, courage, and perseverance of millions of Refugees. International World Refugee Day also encourages the public to extend support for the families forced to flee.

According to statistics, every 60 seconds 24 people decide to flee from war, persecution or terror to find a safer haven to inhale a breath of peace. In a world of a 7.5 billion population, today we witness the highest number of displaced persons.

As a result, according to the UNHCR:

Article 14 of the Universal Declaration of Human Rights asserts the right of everyone to seek and enjoy asylum from persecution. Following are the cornerstone of modern refugee protection:

In addition they set forth a universal refugee definition and classify the basic rights and obligations of refugees (UNHCR 2016). 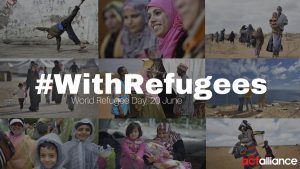 Everyone has a right to live in dignity. As Maslow confirms in his hierarchy of needs that the lower level basic needs of a human being should be satisfied initially. While the first lower level needs are Physiological needs the next are Safety. Former includes air, food, water, sex, sleep, other factors towards homeostasis, etc; Latter comprises of security of environment, employment, resources, health, property, etc; Therefore, every human being has a right to these basic needs.

Consequently, in September 2016, global leaders agreed to work towards a Global Compact for refugees in 2018 where everyone stands together #withrefugees and do their share to ease the burden of mass forced displacement on states.

#withrefugees petition persuades people to ensure that, every refugee:

You can sign the petition to show your solidarity #withrefugees.