On the 15th of July I attended an event recommended by a friend. The message was brief and didn’t include much information. The words “walked 550km” caught my attention.

The second session of the Good Human Series organized by The Better Tomorrow Movement was an eye opener.

Nivendra Uduman began quoting his inspiration Major Ruvan Ranatunga who completed the ‘Long Walk of Hope’ – a mission to raise funds for cancer patients. He emphasized the importance of being there for yourself and others. Not physically, but emotionally. This was the message that resonated throughout his talk. 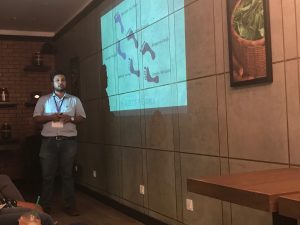 550km | 100 workshops | 44 days | Nivendra’s mental health awareness campaign from Dondra Head to Point Pedro, across the entirety of Colombo with his partner

Cream Soda and a Bed for the Night

Nivendra elaborated how several misconceptions that he too was guilty of were shattered as he communicated with people during his journey. He was not startled by their generosity, but was taken aback by the openness and trust they displayed and reciprocated. Nivendra repeatedly expressed his gratitude to the people he met along his journey. They had no prior knowledge of his background or goal. They had no obligation to be so kind, but still were and offered him meals, a place to stay, and most importantly Cream Soda, to quench his thirst from walking in the scorching sun.

One particular anecdote was charming : Nivendra had assisted an elderly lady carry a coconut branch to her house and in return she went above and beyond to ensure his comfort. He was amazed! An elderly lady, who should be taking absolute precaution to ensure her own safety, trusted, a stranger, a man! Truly showing how meaningful a simple gesture of kindness can be. 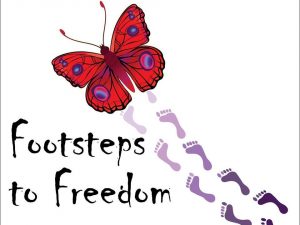 Most of Nivendra’s workshops were spontaneous. He emphasizes on the capacity to discuss pertinent issues. Anywhere, anytime, to anyone! It doesn’t have to be in a lecture hall or a formal atmosphere by a trained psychologist. You too can spread awareness by discussing the importance of mental health with your friend, canteen lady, anyone. 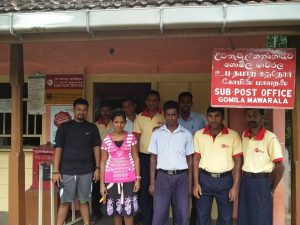 On his path he would always stop at the local post office to post his card home. In one locality a gentleman who worked there questioned him about what he was doing. That one question led to a spontaneous workshop on suicide prevention and stress management in the back of a post office. Similarly impromptu awareness was spread in hospitals, maternity wards, tuition classes, outside school exam halls, promoting discussion on stress management, postpartum depression, coping mechanisms, etc.

Many whom he spoke expressed how relieved they were, how grateful they were now that they could talk about their problems. They were glad they no longer had to suffer in silence. Nivendra reiterated the importance of seizing every opportunity. At the sight of nervous parents outside their children’s scholarship exams he couldn’t help himself from enlightening them on how to help their children cope with potential failure, lower their expectations, etc. He reminisced the tears he saw rolling down the cheeks of students who were preparing to resit their OLs. Tears of joy at the new found knowledge that failure wasn’t forever, and Nivendra too was particularly sensitive having failed 3 of his OL subjects. Business cards were provided to people, particularly students, with important numbers such as the suicide hotline, giving them options when dealing with their emotions. 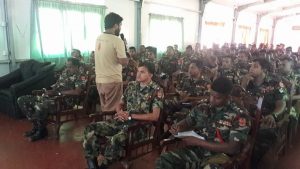 Many prepared workshops were conducted in the army and navy bases across Sri Lanka. Despite the war ending, newer problems emerged or existing problems persisted among soldiers.  Soldiers who experienced trauma claimed to be both undiagnosed and untreated. Supposedly the army has one psychiatric responsible for 300,000 people scattered across the country but he too is based in Narahenpita. Many soldiers suffer from alcohol and substance misuse. Mostly as a result of boredom of joblessness yet not being allowed to return home to seek employment or extended reconciliation with their family and friends. It was beyond devastating to hear that the brave benevolent men who saved millions of lives are now living their own lives in pain and distress.

Nivendra’s journey wasn’t a cake walk. He described moments of immense loneliness, nostalgia, fatigue and exhaustion. Even in preparation for the journey he explained the transition from his ‘cushy city life’ to a more rugged lifestyle gradually. Yet, he conquered it all when he ended at Point Pedro with a wide smile on his face.

Nivendra emphasized the importance of: family, honesty and communication. To him his family met him on several stops along his 44 day journey. They were his pillar of strength throughout. He resonated that blood really is thicker than water.

In addition, he asked us why in the past we had not reached out for help and our answers were varied: fear of judgement, wanting to prevent burdening another and no one being able to relate were the top responses. He proceeded to end the session with some advice, to refuse to adhere to the cultural response of pushing things under the carpet by being open, discussing our problems in person, allowing ourselves to be vulnerable in order to accept our struggles and move past them.

“We need to start asking how do you feel, as opposed to what do you think”. “Any outlet is better than no outlet, be it productive or not, you need to take ownership of your feelings.”

A prevalent problem in our community is that we don’t express our feelings but expect others to empathize. Unfortunately, human connection requires communication, physical and emotional.

Nivendra despite being a qualified psychologist, is a firm believer that hugs and love can substitute pills and medical treatment.

He shared an emotional story of two girls. One with an intellectual disability who was taken care of by her best friend, fed, washed, academically. For 5 years they were together, displaying pure unadulterated love, something we were advised to take an example of. On another occasion a woman who finally had the ability to discuss her condition expressed her utmost gratitude – “Sir budhu wenna oney” which to Nivendra was an emotional moment, fueling his journey, giving him meaning to what he pursues to do every day, change lives one by one.

Nivendra ended his session by encouraging us to knock down our self imposed barriers of, ‘what people think?’. ‘Is it really that big of a problem?’ He insisted go out into the world and embrace ourselves, imperfections and all. Ask for help, give help, talk and hug. In conclusion, he emphasized the importance of having information; having observed a man in a road-side shop gaze at a poster by the The Courage Compassion Commitment (CCC) Foundation.

With their telephone counseling number on it, he realized that, that man may not have required that number that night, nor the next day, but just might need it some day, or could give it to someone else, whose life he could save.

So save these numbers on your phone, right now.

It could help save your life, or someone else’s.

Make sure you attend Nivendra’s next two projects in partnership with Thrive+ (workshop on depression, suicide and coming out) and LIVEBecauseitsworthit (walk and open mic spreading awareness on suicide prevention) follow their Facebook pages to stay updated, also check out his amazing project with the goodwill tribe called Letter Earthlings.